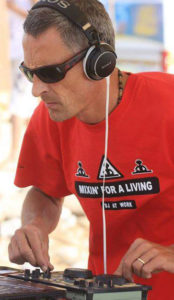 Jason Collins #cypruspartydj was born in the UK and began spinning tunes and Dj’ing in 1986. Armed only with a box of Vinyl, trusty 1210’s, headphones and mic – Jason would perform at numerous venues & events across the UK. In 2006 Jason and his family relocated to Paphos on the beautiful island of Cyprus and soon became a resident DJ at various party, bar and club venues.
In 2015 Jason turned his attention to starting up Mobile DJ Services Cyprus, focusing and specializing in providing a Professional Wedding DJ service in Cyprus.
Jason and Mobile DJ Services are now recognized, recommended and preferred by many Hotel Chains and wedding planners & venues across the island.

Jason is also a Radio Producer & Presenter both in the UK, Canada and in Cyprus. His Popularity on radio in Cyprus was confirmed In 2014 when his show “The Lunchbox” was voted the most popular and most listened to – the first time a Lunchtime show had topped the ratings.

A Moment of Madness from a Radio Show

And as Ring MC at the First Eurosport Bigger’s Better Tournament in 2010 hosted in Cyprus.